An Immigrant’s Perspective on White Privilege and Cultural Bias 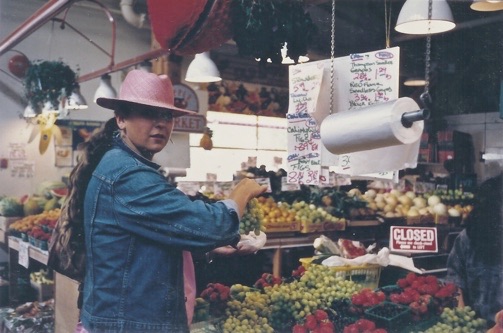 Here is a picture of me, age 21, at a market near San Diego

Confronting racism and all of its expressions as an active process in our lives is long overdue. I have found that my early experiences of growing up in Germany in the ’60s and ’70s and then immigrating to the United States in the ’80s, put me at a different entry point in this exploration than many who have grown up here. I hope that sharing the following glimpses into my early experiences as an immigrant highlights how subtle and often insidious the undercurrents of racism, white privilege, and cultural bias can be. And, perhaps, these might trigger your own reflections of early encounters that have shaped the way you perceive or misperceive or advantage or disadvantage those who fall into categories of the generalized others.

I was prompted to think about all of this again recently when I was backpacking near the Anza Borrego Desert in Southern California, which I had visited numerous times in the late ’80s just after I arrived in the U.S. In my return to this desert, I reflected on earlier days when I first came to understand what it means to live a life as an immigrant in between cultures with few resources, feeling the weight of the atrocities committed by my ancestors, while simultaneously experiencing the white privilege of my ancestry. When looking closely at lived experience as I do in this piece, generalizations and common categorizations don’t hold up any more, and we may find that life’s many in-between spaces are simply messy and ambiguous. Let’s take a look.

I left Germany because I wanted to. I was 20 and longing for a life that was not already prescribed by the milieu of my upbringing following World War II. Although Germany experienced an economic boom following the war aided by the Marshall Plan, the emotional weight of the war’s many losses and the guilt of the holocaust hung heavy over the spirit of the German people.

It was in the summer of 1986 when I arrived in Del Mar near San Diego, CA, alone, with a couple of suitcases and 60 dollars. I was a stranger in a strange land. My conversational English was good enough to get by.

My first job was at a German restaurant, Rudy’s Hidden Acres, where I was the only German employee. The kitchen staff was entirely Hispanic, the owner American, and the two other waitresses Swedish. The restaurant was a few miles inland, and on Sundays, men on horseback still stopped by for brunch. It was all very odd. The restaurant served a range of German dishes entirely unfamiliar to me, including Reuben sandwiches, German chocolate cake (with dark chocolate and coconut), and chicken liver omelets. It turns out that the dishes were invented by folks who immigrated to the U.S. a century or so before and were not necessarily German.

During my first month working at Rudy’s, we celebrated October Fest. In Germany, October Fest is a Bavarian tradition. Being from near Cologne in the central region of Germany, I had never participated in that tradition. Also, folks from Cologne take pride in their beer being better than Bavarian beer. Although I did not wear a dirndl (a traditional southern German dress), I did carry multiple large mugs of beer to crowded tables—something I would have never done or wanted to do in Germany. Here I was 6,000 miles away from Germany, trying to make sense out of what was going on even as I acted the part at Rudy’s. In whatever ways “German-ness” was constructed in that restaurant, it had very little to do with the Germany I grew up in.

As a consequence, it was difficult to celebrate their Germany or the Germany I knew. I had been so glad I had left behind World War II’s emotional weight and the genocide of the Jewish and other peoples that was still permeating the German culture. To this day, I feel a heaviness resting on my chest when I remember what it was like. It was as though leaving Germany was my way to save my soul, free my spirit, and create a life without this cultural burden continuously pressing on me. It was enough just to deal with the impact it already had. It was only with time I came to understand this more fully. But here I was working at a German restaurant in Southern California because I needed a job, and they hired me because I was German.

Leaving Germany was my doorway into appreciating all the ways we as humans can find ourselves in-between spaces where we are neither here nor there, belonging and not belonging, between identities, but in touch with the potential of a perspective that can be surprising, if not transformative.

At Rudy’s, I was repulsed by how the German culture was romanticized or idealized through a vision of the October Fest. But more importantly, I felt deeply misunderstood when these or other cultural characteristics were projected on me. The more profound truth about who I was and why I had left was a story only few could hear. I had two versions of my story. One was of being a pioneer and the other of being a refugee of the soul.

This description about the German culture was posted in March 2018 on lifescience.com.

Germans place a high priority on structure, privacy, and punctuality. The German people embrace the values of thriftiness, hard work, and industriousness, and there is great emphasis on making sure that “the trains run on time.”… “Germans are most comfortable when they can organize and compartmentalize their world into controllable units. Time, therefore, is managed carefully, and calendars, schedules, and agendas must be respected.”

Germans are stoic people who strive for perfectionism and precision in all aspects of their lives. They do not admit faults, even jokingly, and rarely hand out compliments. At first, their attitude may seem unfriendly, but there is a keen sense of community and social conscience and a desire to belong.

Do you find yourself confirming that this description is reasonably correct? What does this description reveal and obscure? Like the partial, idealized, or romanticized Germany at Rudy’s Hidden Acres, what does this characterization emphasize, misrepresent or hide? And what does a characterization like this in turn say about those who create them? The challenge, of course, is to catch ourselves when we are prejudiced and remember that our cultural bias can blind us to the diversity and uniqueness hidden beneath. Being curious and reflecting on instances in which generalizations minimize us is a helpful antidote.

Although I often felt so misunderstood and unseen in my early years as an immigrant, I also benefited from being German and White.

Before arriving in San Diego, I lived in Vancouver, Canada, for a year. There, after eight months of being a nanny/housekeeper, I realized I could be more independent by just cleaning homes. I placed an advertisement in the newspaper saying, “German Cleaning Lady looking for homes to care for.” I was playing right into one of the German stereotypes that I was trying to get away from. The next day I got a call from an eastern European woman who gave me all of her clients over the summer while she took a break. Cleaning houses was not my forte, but my clients did not complain. Would I have gotten the call without putting German in front of “Cleaning Lady?”

The small lunch crowd that frequented Rudy’s had just about cleared out. I was carrying a cup of coffee to one of the remaining guests when I noticed through a window that a border patrol car had stopped in the parking lot, and two guards with rifles were quickly walking toward the entrance of the restaurant. I heard the backdoor of the kitchen slam shut, and I felt cold fear in my veins. The cup of coffee was trembling in my hand. Before I had a chance to make my next move, one of the officers stood two feet in front of me, asking, “Have you seen any Mexicans?” What was I supposed to say? How much explanation should I give? My accent was still heavy, and my voice was shaky. Would they find out that I was still just as illegal as the Mexicans they were looking for? Would this be the end of my newfound freedom? Would I be deported back to Germany and not be able ever to come back again? I said no, lowered my head, and he turned away from me.

Fortunately, the kitchen staff had noticed the border patrolmen before I had and escaped into the hills behind the restaurants. They were gone for the rest of the day. From then on, I was aware of my Whiteness and the protection it provided me. I was in many ways much safer than my Hispanic friends. But this incidence also put fear into my bones. I had been only a couple of questions away from being deported.

A couple of years later, I married a German-American man. We had met a few months after I arrived in San Diego. When it had become clear that the only way I could gain access to a green card was if we were to marry, we did. After two years of being a conditional U.S. Resident Alien, we had to appear for an interview at the Immigration and Naturalization Office. The interview was pretty short. Although I cannot be sure, our shared German ancestry seemed to make a big difference to the interviewer. I received my green card three days before the U.S. went to war with Iraq in 1992. The following day, I felt safe enough to participate in an anti-war protest in San Francisco.

What I remember the most when I first came here was a deep-seated vulnerability. In the early years, before I received my conditional and then unconditional residency, it seemed my life here could be washed away like a sand dune in a big storm. My heart goes out to all of those who come here to reach for better shores but may never have a chance because of their racial background or nationality. I believe it is when I touch into this vulnerability, this fear of losing the ground under my feet, that I come closer to the vulnerability and fear of those who experience racial prejudice and systemic injustice. Experiencing this vulnerability is part of the learning process that I believe we must engage in to act from curiosity and empathy rather than from fear and bias. What might we do to support one another to welcome this feeling of vulnerability?

Systemic racism is deeply entrenched in political, economic, criminal justice, and other social systems and structures in the U.S. and many other countries. The work to change this will not only take a pervasive effort over time but is inseparable from the inner work that is part of any real change. We need to recognize and examine our habitual beliefs, biases, and all the lenses we use to see, appreciate or judge others. I know that I need to do this not only once, but again and again, like a habit of mind, I cannot shake. Doing this opens the door to dissolving the distance between our humanity and the humanity we deny others with the judgments we put on them and the consequences that it has for all of us.